2018 Conference of Louisiana Colleges and Universities Convenes on the Northshore!

Each year the Conference attracts higher education leaders and government officials from across the State to exchange ideas on the improvement of post-secondary education in Louisiana. As in year’s prior, faculty and staff from both public and private post-secondary institutions throughout Louisiana, legislative representatives, and various governmental officials attended the conference. 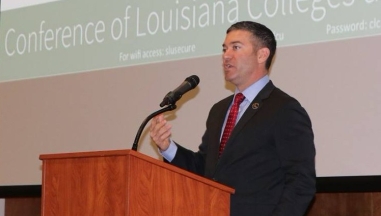 Next on the agenda, a student panel facilitated by Dr. Wainwright, discussed expectations of students in a market driven economy. Students from higher education institutions both private and public in Louisiana demonstrated clear expectations related to higher education support and relevance of program of study to be competitive in a rapidly changing economy. 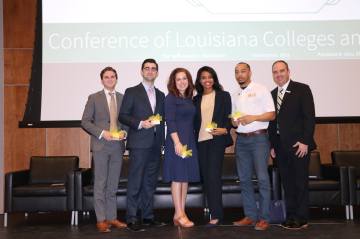 Prior to the convening of the morning’s second panel, facilitated by Dr. Robertson and focused on faculty senate concerns and recommendations, Dr. Joe Rallo, Louisiana’s Commissioner of Higher Education, provided a brief update from the Louisiana Board of Regents.

CLCU continued during lunch with a panel dialog focused on innovation in higher education to be followed by the presentation of the 2018 CLCU Trailblazer Award. The Trailblazer Award honors a Louisiana leader who has made significant and lasting contributions to the progress of higher education in the state. This year’s recipient was Dr. Tommy Warner, Chancellor Emeritus of Nunez Community College.

The afternoon continued with a presentation by Dr. Stanton McNeeley, President of Louisiana Association of Independent Colleges & Universities (LAICU).

Dr. McNeeley spoke on the value of collaboration between Louisiana’s private and independent colleges and community colleges and public universities.

The final item on the conference agenda was the 2018 CLCU Business Meeting and election of new officers. Following her term as president-elect, Dr. Luria Young, Vice Provost for Academic Affairs at Southern University A&M, succeeded to the office of CLCU President for 2018-19. Dr. William Wainwright, Chancellor at Northshore Technical Community College, will assume the role of Past-President.

Special thanks to the staff at Northshore Technical Community College and Southeastern Louisiana University, and to 2017-18 CLCU President, Dr. William Wainwright.