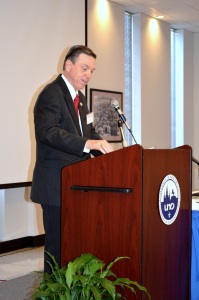 The 76th annual CLCU, hosted by the University of New Orleans (UNO), was held on March 18, 2015 on the UNO campus. The theme of the conference was “Improving by Degrees: Educational Attainment & Beyond.” The conference was well attended with approximately 75 attendees. In attendance were faculty and staff from both public and private post-secondary institutions throughout Louisiana and various governmental officials.

The keynote address was given by Dr. Joseph Rallo, Louisiana’s newly appointed Commissioner of Higher Education. Dr. Rallo became the 8th Commissioner of Higher Education on January 2, 2015. During his keynote address, he discussed transformative forces currently influencing higher education and encouraged faculty members to become more innovative in their approaches to teaching and curriculum development.

Following Dr. Rallo’s address, two presentations on strategic enrollment management were given. Dr. Barbara Hatfield (Provost and Vice Chancellor for Academic & Student Affairs at Louisiana State University Alexandria) highlighted the steps her institution took to increase enrollment by 20%. Dr. Brett Kemker (Vice President for Student Affairs at UNO) and Ms. Sarah Debacher (Chair of Freshman Writing at UNO and Director of the Greater New Orleans Writing Project) discussed with attendees the steps their institution is taking to build an academic community in an effort to increase retention and persistence.

Prior to lunch, political commentator and New Orleans resident, Mr. James Carville, addressed conference attendees. In his address he called upon the higher education community to challenge legislatures in the upcoming legislative session to reinvest in public higher education in the State. 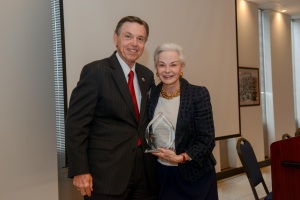 CLCU continued with the awarding of the 2015 CLCU Trailblazer Award. The Trailblazer Award honors a Louisiana leader who has made significant and lasting contributions to the progress of higher education in the state.  This year’s recipients were Mr. Patrick F. Taylor (posthumously) and Mrs. Phyllis M. Taylor. CLCU President, Dr. Peter Fos, presented the award to Mrs. Taylor in recognition of her and her late husband’s extraordinary service to public higher education through the creation of the Taylor Opportunity Program for Students (TOPS), Louisiana’s merit-based scholarship program.

Congratulations to the following individuals on their election to the CLCU Board during the annual business meeting:

Special thanks to the staff of the University of New Orleans, and to 2014-15 CLCU President, Dr. Peter Fos.

This entry was posted in 2015 Conference. Bookmark the permalink.