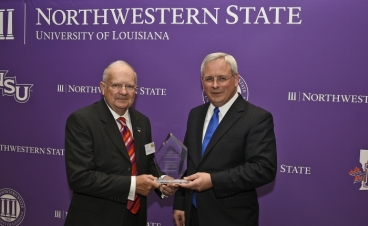 The 78th annual Conference of Louisiana Colleges and Universities, hosted by Northwestern State University (NSU), was held on April 6, 2017 on the NSU campus in beautiful Natchitoches, LA.

Each year the Conference attracts higher education leaders and government officials from across the State to exchange ideas on the improvement of post-secondary education in Louisiana. As in year’s prior, this year’s attendance was made up of faculty and staff from both public and private post-secondary institutions throughout Louisiana, legislative representatives, and various governmental officials.

CLCU 2017 began with opening remarks from Dr. Jim Henderson (2017 CLCU President and President/CEO of the University of Louisiana System), and Dr. Jim Robinson (President of the Association of Louisiana Faculty Senates).

Opening remarks were followed by comments from Dr. Joseph Rallo, Louisiana’s Commissioner of Higher Education. Dr. Rallo discussed national and state-wide trends currently influencing higher education…and encouraged faculty and staff members to continue to strive to be more innovative in their approaches to teaching and curriculum development. Dr. Rallo also spoke about the recently implemented outcomes-based funding model, the role of higher ed. in the upcoming legislative session and top priorities for Regents in the next few months including seeking tuition and fee autonomy for institutions, establishing state-wide dual enrollment standards and development of a plan for the utilization of Open Educational Resources (OER) to lower the cost of course materials for students.

The keynote address was provided by Mr. Kevin Richard, Deputy Secretary of the Louisiana Department of Revenue (LDR), who spoke about recommendations related to long-term fiscal reform that resulted from the work of the HCR 11 Task Force. As a member of the Executive Management Team, Mr. Richard supervises Litigation, Policy and Legislative Services, Business Services and the Office of Charitable Gaming at LDR. Mr. Richardson has worked in nearly every enforcement and audit position within the agency. Deputy Secretary Richard’s previous employment experience also includes serving as Director of the Field Audit Income Tax Division, the Audit Intelligence Team and as Revenue Tax Auditor of the Houston District Office.

The two panels were followed by a presentation from Dr. Nia Wood Haydel, Director of Academic Excellence, the Thompson/Cook Honors Program and Assistant Professor of Urban Studies and Public Policy at Dillard University. Dr. Haydel presented some initial findings related to a project being conducted at Dillard using emotional intelligence to prepare students for their professional lives. Dr. Haydel has been a higher educational professional for over 18 years working in Student Affairs, Enrollment Management, Academic Affairs and Intercultural Relations. In her current role, she oversees the University’s retention initiatives, as well as, academic advising, progression and academic enrichment initiatives and service learning for first-year students, and coordinates initiatives for Honors students. She is also responsible for assessment initiatives within the first-year experience.

CLCU continued with the presentation of the 2017 CLCU Trailblazer Award. The Trailblazer Award honors a Louisiana leader who has made significant and lasting contributions to the progress of higher education in the state. This year’s recipient was Dr. Daniel Reneau, President Emeritus, Louisiana Tech University. CLCU President, Dr. Jim Henderson, presented the award to Dr. Reneau commemorating his dedication and the profound impact he’s had on higher education at Louisiana Tech, the UL System, and at the state level. Dr. Reneau became the Tech’s 13th president in February 1987. Among his many accomplishments over the next 26 years were implementing selective admissions in 1992, building state-of-the-art academic and research facilities, growing doctoral programs and creating a research and technology park. After a 50 year relationship with Louisiana Tech University – both as a student and an educator – as well as serving as the university’s President, Dr. Daniel D. Reneau retired from the university on June 30, 2013. In January 2015, Dr. Reneau was named interim president of the University of Louisiana System where he led the system until Dr. Henderson’s appointment began in Jan. 2017.

The final item on the conference agenda was the 2017 CLCU Business Meeting and election of new officers. Following his term as president-elect, Dr. William Wainwright, Chancellor of Northshore Technical Community College, succeeded to the office of CLCU President for 2017-18. Dr. Jim Henderson, President/CEO of the University of Louisiana System will assume the role of Past-President.

Other members elected to the 2017-18 Executive Committee were:

Special thanks to the staff at Northwestern State University, and to 2016-17 CLCU President, Dr. Jim Henderson.